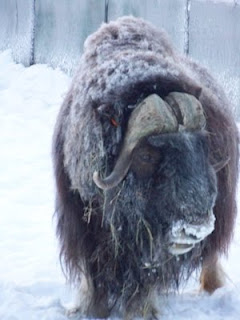 TwoYaks is the humble nom de plume of a research biologist at the University of Alaska Fairbanks.

He is not a moose, although many people have accused him of being one. He is, however, part Caribou.

His blog is not affiliated with the University of Alaska, Fairbanks, and all scribblings are his own dumb fault. Anyone who says his opinion necessarily reflects that of the University is just making stuff up.

Why TwoYaks? Well, it's a play on words that if the explained, he'd give his identity away. His identity is more or less obvious in that anyone engaged in biology in the State could probably figure it out with a minimal of trouble, but he's of the opinion that there's no need to make life any easier for the PETA people out there. After all, he's already had co-workers threatened once...

This blog is not about TwoYaks. It's about biology, Alaska, Eskimo languages, and politics. His goal is to use the power of the internet to make something other than funny cat pictures. There's so much wildlife science mis-information out there, and he's tired of the usual  suspects spreading misinformation around, that he'd decided to take a whack at it.

He also really, really likes blogging about beer. People who know him know he can't hold his liquor, but that doesn't stop him from enjoying a good craft beer. If you want to butter him up, his favourite is Chimay Grand Reserve.