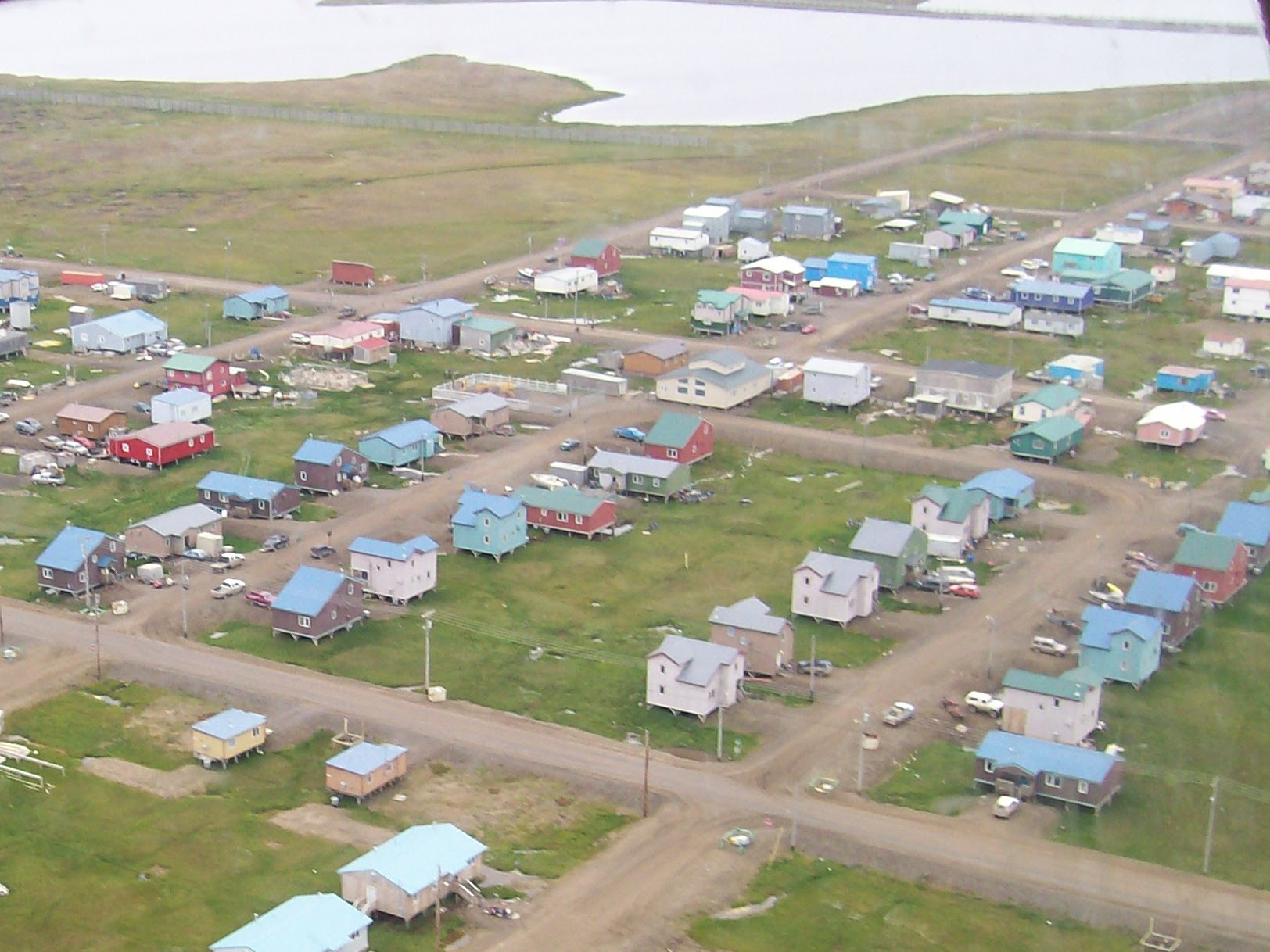 My gradstudent arrived from Barrow to Fairbanks. I'm very jealous of her. She was out hunting caribou, and studying them too. She left in May, but I stayed behind in Fairbanks. Next year, I want to go to Barrow also. I don't want to be stuck in the muck in Fairbanks.

The future of Federal Involvement in AK 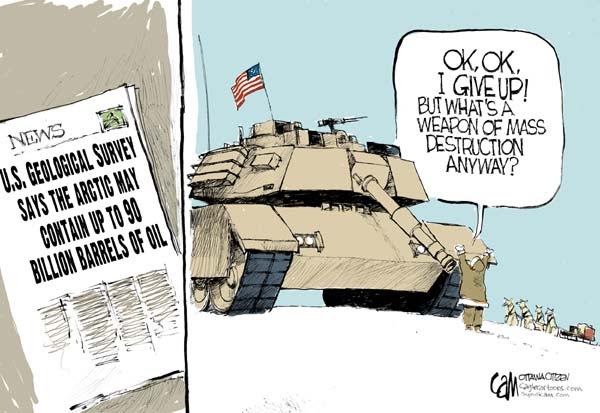 Comic by Cam.
Not exactly my politics, but still funny anyhow.
Posted by TwoYaks at 14:34 No comments:

I think it's been a wet summer. I could be biased by the fact that I woke up to find an inland sea around my cabin yesterday (which is luckily on posts, so I avoided flooding myself), but luckily, I have the best sorts of things on my side: data. Over to the left is a graph from the Alaska Climate Research Centre, a group in UAF who strangely research climate. Amazing! Anyhow, it's a cumulative precip graph. The smooth line is the average, and the wiggly one is this year's actual. You can see our snow drought on there pretty clearly, and now our wet summer. And it dosen't even have the last few days on there - Fairbanks proper got 1.5 inches of rain last night, which is more than we get in some months. It actually hasn't been half as cold as people make it out to be, this summer - it's just been so wet that it's felt colder.
Posted by TwoYaks at 13:00 5 comments:

Email ThisBlogThis!Share to TwitterShare to FacebookShare to Pinterest
Labels: weather

Why bother with Alces alces? It's not an especially easy to work with species - there's no more than 140,000 research subjects in the whole state, and they don't deal with captivity very well. Additionally, they're large, have long life cycles, and can monkey stomp you into the ground (terror is stumbling on a cow and her calf). Right now any self respecting biologist is going `Woah! Count me out!,` and I haven't even mention the sheer cost of the enterprise, which needless to say is not cheap at all.

Dig through your freezer a bit. Now, chances are, if you're in the interior, you have some salmon in there, maybe some caribou, berries if you flash froze any (I've got a pound and change of low bush cranberries I need to do something with. Ideas welcome!), and probably some moose from last year. Moose is a) an important subsistence species b) an important game species c) a species important to tourism, especially pertaining to point b, d) an integral part of early secessional environment. Areas are managed to encourage moose populations, sometimes to the detriment of other species. Moose aren't just big, they're a big deal.

The PI of the lab - that's science lingo for principal investigator, or `the boss man` - is interested in genetic mannagement of game (and some non-game), along with moose ancient-history (demography), and population ecology - a buzz phrase for how populations change over time, with respect to their enviroment. Therefore, I'm intersted too. That's how it works, if you want to pull your own around the lab. ; ) Honestly, though, I've interest in moose behaviour and how it pertains to population ecology, so we've considerable overlap in research interest. We're not a one trick poney over here (one trick moose?), and as I hinted at earlier, we deal with a variety of species. But first and foremost, I say elitnaurtuq tuntuvagnek when we tell what we study. Actually, mostly, it's `I study moose.` ; )
Posted by TwoYaks at 15:08 3 comments:

Email ThisBlogThis!Share to TwitterShare to FacebookShare to Pinterest
Labels: personal, science
We interrupt your regularly scheduled blog post to go Holy Shit. Well, yeah, knew it was coming some day, but the timing (it was about a year ago the FBI raided his place) is fairly... something.

Edited to add:
The timing couldn't be better for a series of ads just bought by Stevens' primary challenger. Vic Vickers might just go from `Who?` to a serious threat to Stevens' shoe-in candidacy.
Posted by TwoYaks at 09:27 No comments:

I've been thinking about winter a whole bunch, lately. I got a new pair of pac boots on the cheap that arrived in the mail, and the fireweed is nearly to the end of it's bloom! They (who said it first, anyhow? Who is `they?`) say that when fire 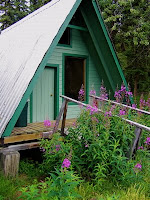 weed flowers to it's tip, summer is over, which is a good rule of thumb. Everyone Else is throwing up their pictures, so I'll join the boat!
That's the cabin of the ex-neighbour. Sadly, he got into an accident and died just last month. Shame. Horrible shame. I liked him. The current neighbour lives a bit further down, and she seems all right. Good taste in beer, and she doesn't make a ruckus all hours. Not at all like the young couple who lived there before - nary two brain cells to rub together between the two of them. They left after about two months, probably back to North Pole or some such.
Fireweed is a member of Onagraceae, or more commonly known as the Willow Herb Family. Well, more commonly known than `Onagraceae.` It's a fairly vibrant and widespread family of plants, or at least the ones I've seen had been. Fireweed is a early colonizer that can endure huge amounts of soil disturbance - it would spring up right after bush fires, leading to it's common name. Just about everywhere a human pokes some dirt around, in the Interior, Fireweed springs up. Luckily, it's native to the area, so helps occupy that early disturbance niche that is otherwise frequently occupied by exotic Eurasian species such as cheatgrass as is a problem in the intermountain west in the lower 48. That's not to say we don't have invasive weeds up here, but they're fewer in number, and often struggle to adapt to our climate. A few notable exceptions exist, that I'll blog about later.
Posted by TwoYaks at 14:06 No comments:

In yup'ik, there's a word for a Linguist - Qaneryariurta. There's Legislator (alerquista), and even the Chineese (lerleraaq). But to my knowledge, there's none for biologist. There's some for trooper, and game mannagers, but most of them aren't repeatable in public. : ) One of the more benign ones is tegusta - when you break it down, it means something like `grabber.` A tegusta is someone who grabs people. Not the best image for police, but reflective of past relations between law enforcement and the Y-K.
Posted by TwoYaks at 11:00 No comments: 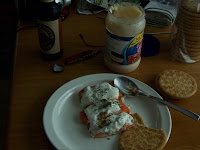 For you eating delight: Dill Salmon bake, from Cathy at Keeping it Real. It sounded far better than what I had planned for dinner (left over moose and gravy over instant spuds) so I gave it a whirl. It was very, very good. @E, who lives on the lower Y-K, says she's heard of the recipe before, leading me to wonder: Why didn't anyone tell me before! :D Not the best beer to have with it, by the way. I'd recomend something a tad lighter, with out the bitter. Maybe something Macro (god forbid!). You're looking for a clean, light flavour to go with this, something that won't linger on the pallet too long before going on its merry way.
Posted by TwoYaks at 18:37 2 comments:

Email ThisBlogThis!Share to TwitterShare to FacebookShare to Pinterest
Labels: food
If you want to see some of Alaska's best and brightest minds, go check out the entry on Global Warming over at the Daily Minor News. The comments sections are often good for a laugh, but today is especially notable in inanity.
Posted by TwoYaks at 17:29 No comments:

It's no great mystery that Fairbanks and Anchorage are not on the best of terms. In fact, I think you could replace `Fairbanks` with half the state, and still have a true statement. Anchorage is not what the rest of the state is like by any stretch, something that really didn't get hammered home until I went there just recently.

If places can be said to have a tempo, Anchorage is around somewhere around `salsa` - it's hectic, dirty, crowded, with luxuries not seen in the rest of the state. Traffic is thick, confusing, and on roads that seem to point every which way. It's noisy, and I got the cold shoulder there more than I'd got anywhere else. But these are just reasons for not living in Los Anchorage, not reasons for abjectly hating it.

Rather, where things really go wrong is when Anchorage - who has proportionally greater representation due to its population - starts acting like it's condition is the condition of the state. Example: That area has very few (I won't say `no,` because there's probably 2 hidden away somewhere) people engaged in subsistence activities. They're all, or mostly sport hunters and fishers. That's fine. I don't think many people have a problem with sport hunters per se. The problem comes when they generalize from their economy to the state's, and begin acting like /everyone/ can pop on down to Fred's and afford all their food via that, whenever. Joe, that just ain't so. Not even in Squarebanks.

There's numerous other instances of this. Game law, energy, road use, mineral exploration, law enforcement... the list goes on. What works in Anchorage often doesn't work in the rest of the state, but there appears to be a strict case of myopia that prevents a good number of voters and planners from seeing this. This is highly unfortunate, as it sets up for mutual resentment, and really impedes political progress.

I'm writing about this because I was in Anchorage last weekend. We're talking about a guy who finds downtown Fairbanks confusing and rancorous, Anchorage was nearly enough to make my head split. I was flabbergasted at how cheap things where there - something that I know makes bush and hub communities look at Fairbanks with envy. I know I went in there expecting to hate Anchorage, and so my opinion I formed there was probably full of confirmation bias and other cognitive fallacies, but I'm sure there's a nugget of truth in there somewhere.
Posted by TwoYaks at 10:25 No comments:

Hello! I think that's the traditional way to start a blog, by making people feel welcome . I've long wanted to keep a blog about science, Alaska, and those things that my family and friends find horrendously boring; this is my attempt at that blog! My name is TwoYaks, and I live here: 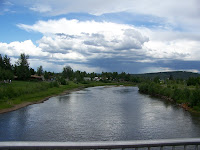 Well, not really, since that's a picture taken from the downtown. I like to avoid that place like I avoid hammering my fingers with a maul. It's weird down there. I'm a wildlife biologist for the University of Alaska, Fairbanks (UAF), but more of the researchy sort. I've little (no) say in management, which is handled by ADF&G (Alaska Department of Fish and Game) and Fish and Wildlife (a fed office). My role is more as that guy who steps in when people say `we need more science` (more on that phrase later!).

Otherwise, I'm just a young gun (You're old when you're dead) who likes much of what anyone else likes. I started my job up here about a year ago. Alaska's dirty secret is that Alaskans are mostly normal folk. Oh, sure, some of the details around the margins change, but we're otherwise fairly normal people. We just happen to live in a really pretty place, where you have to go about life a tad differently. 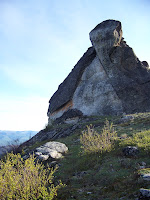